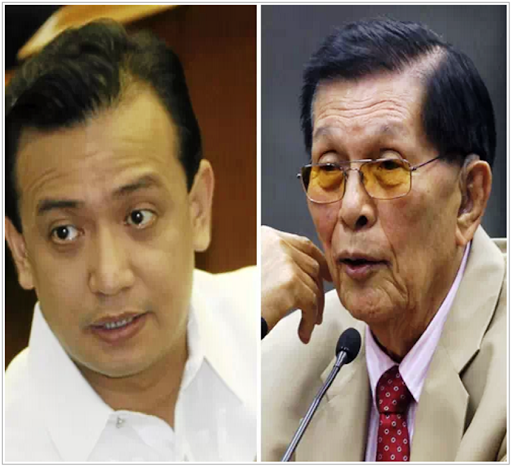 Senate President Juan Ponce-Enrile exposed Senator Antonio Trillanes IV's alleged  "quiet, secret and clandestine" meetings with Chinese officials on the Scarborough Shoal issue, including  the latter's alleged visit  as the Philippine negotiator to China  where he supposedly called the Department  of Foreign Affairs chief  a "traitor."

Taking the floor on Wednesday, Enrile revealed that Trillanes met with Philippine ambassador to China Sonia Brady in Beijing sometime in August this year where  he supposedly said things  against  Foreign Affairs Secretary Alberto del Rosario.

"You went to China, you asked the ambassador of the Philippines there, Madam Brady, for a meeting and you said, 'Don't take notes during our conversation' and you called the Secretary of Foreign Affairs a traitor. In fact, you told me that he committed treason," said the Senate leader.

When Trillanes tried to stop the Senate leader from reading the alleged notes of the envoy during their meeting, Enrile cut him and said: "Don't teach me on parliamentary proceedings. I'm not answerable to anybody about what I'm saying in this court."

Senate Pro Tempore Jose "Jinggoy" Estrada, who was presiding over the session, allowed Enrile to read Brady's notes, prompting Trillanes to walk out of the session hall.

"He can't take the heat. He's a coward," Enrile said as Trillanes was leaving the hall.

Senate Minority Leader Alan Peter Cayetano tried to pacify the Senate leader, saying that the latter was "entering the emotional phase" of the discussion.

"No, I'm not emotional. The truth must be told. I don't start this. You start a fight with me, I'll take you on," said Enrile.

Enrile then started to read the notes.

Based on Brady's notes, Enrile said it appeared that Trillanes was protecting China and even suspected the United States behind the Scarborough Shoal dispute.

"When there was a simultaneous withdrawal, he thought to himself  this is not the arrangement," Enrile said, reading the notes .

"He was protecting the Chinese," the Senate leader commented.

The notes also revealed that the release of a picture of man planting a Chinese flag on the disputed island was from an old photo from 1980s.

"So this was rehashed," Enrile said.

Trillanes, Enrile said, also wanted everything that was happening in Scarborough to be made secret to protect the interest of China.

"Senator Trillanes has been quietly, secretly clandestinely meeting with the Chinese about Scarborough or the West Philippine Sea," he said.

Trillanes, Enrile said, also told Brady that in the Philippines, no one cares about Scarborough Shoal.

"He said to Mrs. Brady sa Pilipinas walang may gusto na sa atin yung Scarborough Shoal. Yan ang sinasabi nya, Filipino ba 'yan?Makabayan ba yan? (in the Philippines no one likes to have the Scarborough Shoal. That's what he said. Is that being a Filipino?)

"My god what kind of a senator is this?" Enrile said.