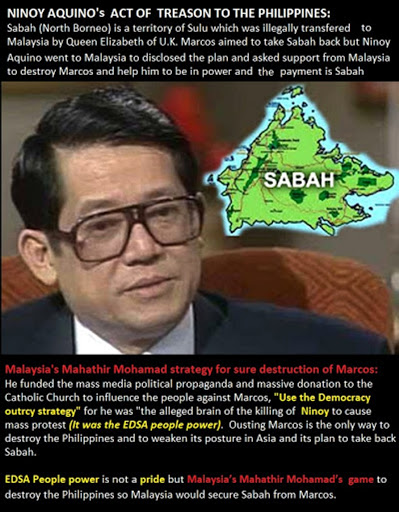 (Benigno Aquino) Ninoy Aquino's act of treason to the Philippines: Sabah (North Borneo) is a territory of Sulu, Philippines which was illegally transferred to Malaysia by Queen Elizabeth of U.K. because Malaysia was a former colony of Britain. Marcos aimed to tahe back Sabah North Borneo but Ninoy Aquino went to Malaysia to disclosed the plans and asked support from Malaysia to destroy Marcos and help him to be in power and the payment is Sabah.

Malaysia's Mahathir Mohamad strategy for sure destruction of Marcos:

He funded the mass media political propaganda against Marcos and massive donation to the Catholic Church to influence the people against Marcos, "Use the Democracy outrcy strategy" for "the allegedl brain of the killing of  Ninoy to cause mass protest (It was the EDSA people power).  Ousting Marcos is the only way to destroy the Philippines and to weaken its posture in Asia and its plan to take back Sabah

EDSA People power is not a pride but a Malaysia’s Mahathir Mohamad’s  game to destroy the Philippines to secure Sabah.

Former senator Benigno "Ninoy" Aquino Jr. had promised Malaysia in 1983 that the Philippines would drop its claim over Sabah in exchange for its support in the move to oust strongman Ferdinand Marcos, a former foreign affairs official revealed yesterday 13th March 2013.

Hermes Dorado, former national territory division head of the Department of Foreign Affairs, said Aquino met with then Malaysian Prime Minister Mohammad Mahathir before he went back to the Philippines and was assassinated on Aug. 21, 1983.

Dorado said there were no official records of the supposed meeting between Aquino and Mahathir, but said he "became privy to this bit of intelligence" from former ambassador and retired general Rafael Ileto.

"General Ileto indirectly confirmed that Ninoy Aquino asked for help from Mahathir in exchange for dropping the Sabah claim when he gains power," Dorado told a forum at the University of the Philippines in Quezon City.

Dorado said Ileto was the person assigned to monitor Aquino's movement on his journey back to Manila.

"There was a commitment to help oust Marcos," he added. "That is the reason why the government today is somehow reluctant to support the Sabah claim."

"Our hands are tied today because the leadership up to this day is committed to drop the Philippine claim of Sabah," he said.

According to Dorado, the clearest proof of Ninoy's supposed pledge to Malaysia will be found in the 1987 Constitution, which was written during the presidency of his widow Corazon Aquino.

Dorado said the 1987 Constitution amended the first article of the 1973 Constitution and removed the phrase, "and all other territories belonging to the Philippines by historic right or legal title."

The 1987 Constitution revised the definition of Philippine territory and "deleted Sabah as a historic claim backed up by the legal title pertaining to the sultanate of Sulu," he added.

Dorado said Mrs. Aquino had no choice but to honor Ninoy's commitment to Mahathir because she needed support from ASEAN nations to legitimize her ascendancy to the presidency through the people power revolution.

"Malaysian Prime Minister Mahathir adamantly refused to attend the ASEAN Summit in Manila until President Cory made a firm commitment to amend Article 1 of the 1973 Constitution," Dorado pointed out.

"Malaysian hard-ball diplomatic and guerrilla war maneuverings, backed by shrewd use of economic leverage, sourced from huge revenues from oil extracted in Sabah, were completed by 1987," he added.

"They succeeded in forcing the Constitutional Commission to drop the Philippine Sabah claim, hands down."

Dorado said the amended Baselines Law approved in March 2009 resulted in the exclusion of Sabah from the Philippine territory.

He said the amended law removed Section 2 of the 1968 law that included the phrase, "…the territory of Sabah, situated in North Borneo, over which the Republic of the Philippines has acquired dominion and sovereignty."

"Removal of the specific reference to Sabah represented a disastrous outcome to the claims of the sultanate of Sulu," Dorado said.

He claimed the results of the supposed "Ninoy-Mahathir pact" have destroyed all peaceful possibilities of pursuing the country's claims.

"We have so much wealth in Sabah na dapat tayo ang nakikinabang (we should be the ones benefitting)," Jacel said.

She said the lease agreement over North Borneo expired in 1978.

She accused the Aquino administration of protecting the interests of the Malaysian prime minister rather than the interest of the Filipino people.

"I would prefer to be another (nationality) rather than a Filipino citizen under our current set of leaders," she said.

"This is the first official talk from our side and from the side of the government," she said, declining to provide additional information as she was not privy to what was discussed in the meeting.

Jacel said the development was a "good gesture" on the part of the government, and that its intention was for the benefit of the Filipino people.

Citing latest information from Sabah, Jacel said Agbimuddin Kiram and his people are safe but a lot of Filipinos have become victims of excessive force by Malaysian security forces. – With Paolo Romero, Jaime Laude, Marvin Sy.

Read more… this article is published by PHILSTAR click here..