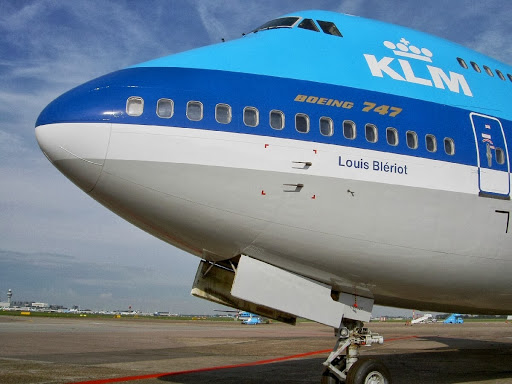 An Air France-KLM plane on an airport tarmac. The airline reportedly prevented an 18-year-old indigenous Philippine woman, who was en route to Rio de Janeiro, Brazil, for World Youth Day from boarding on her onward flight on July 20 at the Kuala Lumpur airport because she appeared "not ready to travel" even if she had a folder with full documentation supporting her trip to Brazil. PHOTO FROM WIKIMEDIA

Koninklijke Luchtvaart Maatschappij N.V. (Royal Aviation Company), known by its initials KLM, is the flag carrier airline of the Netherlands. KLM's headquarters is in Amstelveen near its hub at Amsterdam Airport Schiphol. KLM operates worldwide scheduled passenger and cargo services to more than 90 destinations. It is the oldest airline in the world still operating under its original name.

The merger of KLM with Air France in May 2004 created Air France-KLM, which is incorporated under French law with headquarters at Paris-Charles de Gaulle Airport. Both Air France and KLM continue to fly under their distinct brand names. Air France-KLM is part of the SkyTeam alliance.

In spite of the complete documents, sponsorships, bank account and other legal travel documents, a Bukidnon's Talaandig tribe member were denied to board the Air France KLM Airline.

Philippines—An 18-year-old indigenous Philippine woman who was en route to Rio de Janeiro, Brazil, for World Youth Day was denied boarding on her onward flight on July 20 at the Kuala Lumpur airport, because personnel of KLM Airlines said she appeared "not ready to travel" even if she had a folder with full documentation supporting her trip to Brazil.

The incident involving Arjean Marie Belco of Bukidnon's Talaandig tribe was posted on the social networking site Facebook in a letter of complaint from Goodxorg, the sponsor of her Brazil trip.

According to the Facebook post, Belco went through immigration in Malaysia without incident but was not allowed to board her connecting flight to Rio de Janeiro by a KLM employee identified as Mr. Shawa who said that Belco appeared "not ready to travel" and "that he was doubtful" about her trip, "even if she had a folder full of documentation."

"Arjean was denied her right to travel. This could also be perceived as a possible case of discrimination based on appearance, gender, ethnicity, nationality, age or social status," Goodxorg said in its post.

Belco's Brazil trip was shouldered by Goodxorg and its partner Cartwheel Foundation.org., which pooled donations from all over the world to send the BS Education student to the Catholic event.

The airline employee allegedly barraged Belco with questions casting doubts on the legitimacy of her trip. She was asked, "Why is your passport so new?" "Your ticket is too cheap and purchased yesterday." "Why (are you) flying through Malaysia if there are flights from the Philippines?" and "How much money (do) you have?"

The Brazil trip is Belco's first outside the country, according to her sponsors, which explains her new passport. They also explained that the flight from Kuala Lumpur to Rio de Janeiro was approximately $1,000 cheaper than KLM's Manila to Rio flight.

Belco showed airline personnel a bank statement from Cartwheel Foundation showing sufficient funds. She had $100 and P3,370 on her for emergencies and meals before her connecting flights to Brazil. She was also carrying clippings of media stories published in the Philippines about her trip.

But Goodxorg lamented that the papers and calls from the group were not enough for KLM.

The airline employee, Mr. Shawa, told the staff of Goodxorg over the phone that there was nothing he could do and that another ticket had to be bought. The group was required to get in touch with the Dutch Embassy in Malaysia, the Facebook post said.

"He was even laughing while listening to our side. We believe this is unacceptable," the group said.

The nonprofit group Goodxorg (Good X or Good Exchanges) is led by Luis Petzhold, a Brazilian filmmaker and youth advocate, and Risa Halaguena, a Filipina lawyer and writer. Sending Belco to Brazil to attend World Youth Day, an international Catholic event to be held from July 23 to 28, is a pilot project of the group.

According to its Facebook page, Good X is "all about experiential learning. We believe that travel, culture and creativity should be appreciated and nurtured at a young age."

In its letter posted on Facebook, Goodxorg said Belco showed the KLM staff the address and contact info of her host family in Brazil, and that she requested the airline staff to contact her sponsors in the Philippines to verify the information she gave. But the KLM staff denied the request.

The student also showed her folder of documents, which included her proof of enrollment in Pamulaan College and the University of South Eastern Philippines, and certification that she is a Cartwheel Foundation scholar being sponsored by Goodxorg and Cartwheel for the trip.

The Facebook post also said that Goodxorg contacted KLM reservations for pertinent information on the trip to Brazil before purchasing the ticket.

With report from Inquirer