Philippines Rank 12 Safest in the World, 4TH and Malaysia Fifth in Southeast Asia 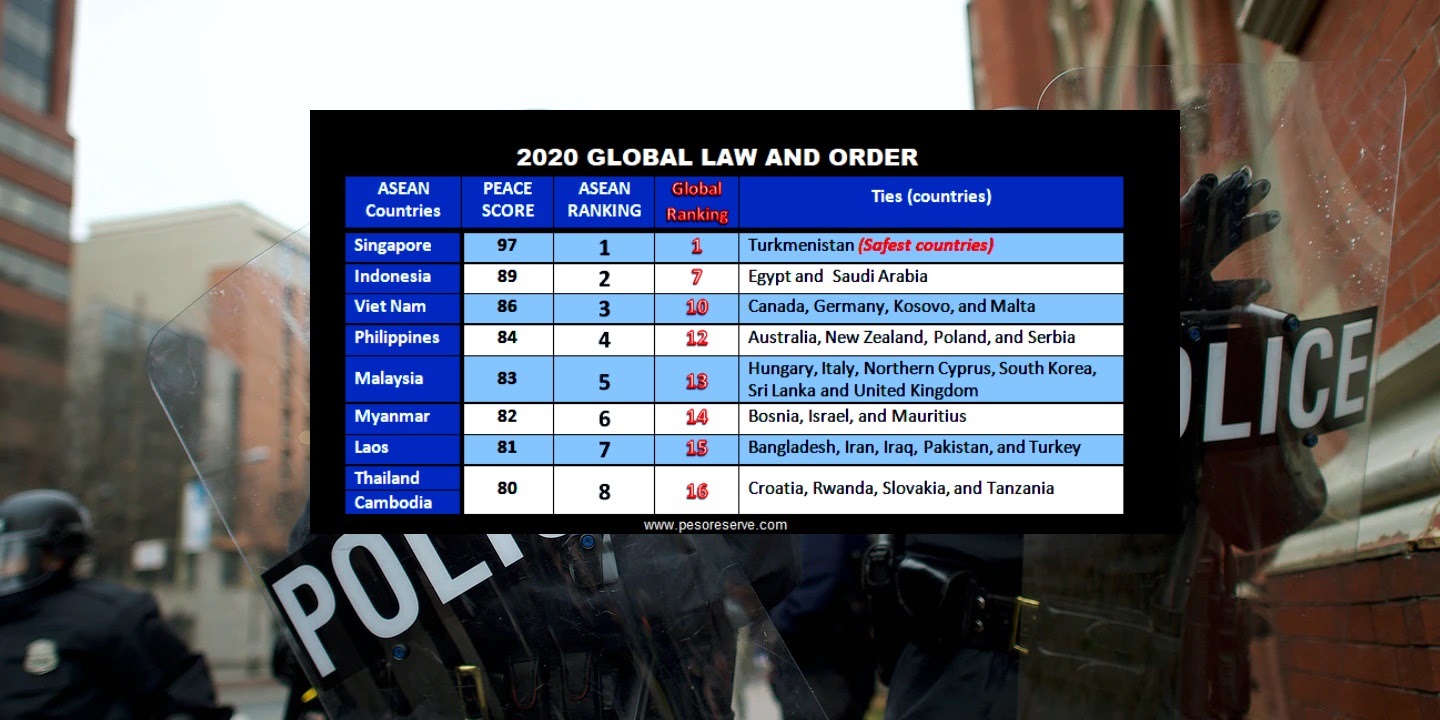 The Philippines was listed among the Top 12 safest countries in the world based on the 2020 Global Law and Order Report by international analytics firm Gallup.

The country got a score of 84 in the worldwide survey and is tied with Australia, New Zealand, Poland, and Serbia. The Philippines' score is also higher than the 82 index score for the world in 2019 by the global analytics firm.

The poll gave out four questions to the respondents which asked about their confidence in their area/city's police force, safety on walking alone at night in the city/area where they live, stolen money/property from them or other household member in the past 12 months, and being assaulted or mugged in the past 12 months.

The Office of the Presidential Adviser on the Peace Process welcomed the results of the Gallup survey, emphasizing that peace is a shared responsibility among all stakeholders and the current gains in peace and security are due to the collective efforts of the government and the public.

"We are glad to be recognized as among the safest countries in the world. Thanks to our law enforcers, peace workers, and everyone who has made a commitment to peace, we are moving forward as a peaceful, progressive and resilient nation," said Presidential Peace Adviser Carlito Galvez Jr.

Singapore along with Turkmenistan topped the Gallup poll with 97 global index score as world's safest countries. 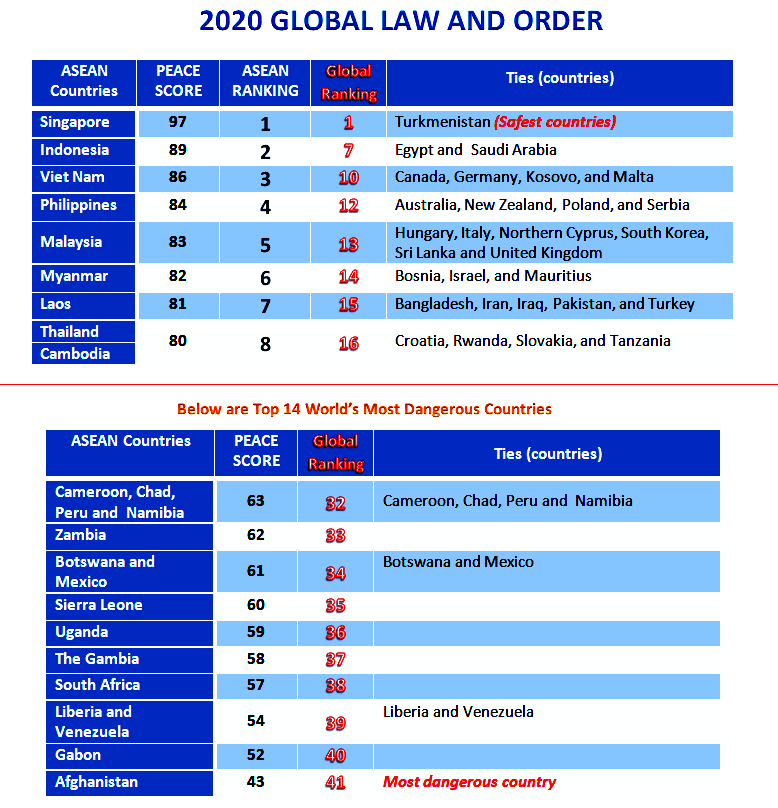 OPAPP welcomes study hailing PH as among Top 50 safest countries
The Office of the Presidential Adviser on the Peace Process (OPAPP) has welcomed the results of a recently published study, which listed the Philippines as among the top 50 safest countries in the world in 2019.
Presidential Peace Adviser Carlito Galvez Jr. noted that peace is a shared responsibility among all stakeholders and that the current gains in peace and security are due to the collective efforts of the government and the public.
“We are glad to be recognized as among the safest countries in the world. Thanks to our law enforcers, peace workers, and everyone who has made a commitment to peace, we are moving forward as a peaceful, progressive, and resilient nation,” Galvez said in a press release issued on Tuesday.
The 2020 Global Law and Order report by global analytics firm Gallup was based on interviews of around 175,000 respondents, across 144 countries and areas in 2019.
Respondents were asked the following questions:
--In the city or area where you live, do you have confidence in the local police force?
--Do you feel safe walking alone at night in the city or area where you live?
--Within the last 12 months, have you had money or property stolen from you or another household member?
--Within the past 12 months, have you been assaulted or mugged?
The Philippines registered a global index of 84, similar to Australia, New Zealand, Poland and Serbia.
Meanwhile, Singapore and Turkmenistan ranked first and second, respectively, both gaining a global index of 97.
Personal safety, collective peace
OPAPP, as the government agency mandated to oversee and manage all peace tables across the country, has played a key role in moving forward the comprehensive Philippine peace process over the years.
The agency facilitated the decommissioning of both the Moro Islamic Liberation Front (MILF), and the Communist Party of the Philippines-New People’s Army (CPP-NPA) rejectionist group Rebolusyonaryong Partidong Manggagawa ng Pilipinas/ Revolutionary Proletarian Army/ Alex Boncayao Brigade- Tabara Paduano Group (RPM-P/ RPA/ ABB-TPG) in September 2019.
The implementation of the Whole-of-Nation Approach to End Local Communist Armed Conflict (ELCAC) under Executive Order No. 70 has also paved the way for the successful conduct of localized peace engagements (LPE) across the country.
As a result, hundreds of former rebels (FRs) across the country have returned to the folds of the law and are now living as peaceful and productive citizens.
The agency also led aggressive information and education campaigns particularly among vulnerable sectors such as education, agriculture, labor, security, and indigenous peoples (IPs), to counter the communist group’s recruitment and propaganda.
“All these efforts aim to promote reconciliation, mutual understanding, and solidarity among the people. By building a culture of peace, we help empower people and communities to resist violence and become agents of peaceful transformation,” Galvez said.
Galvez, a former chief of staff of the Armed Forces of the Philippines (AFP), also thanked the uniformed personnel for their major contribution in preserving peace and order in the country.
“Our brave police and military personnel are not only keeping our streets safe, but also function as our first responders in times of calamities, disasters, and accidents. We thank and salute them for all their commitment and hard work,” Galvez said. read more at  (OPAPP PR) PNA and CNN Philippines
ASEANIndonesiaMalaysiaPhilippinesPoliticsSafest Countries 2020Singapore